By Tom Lane June 04, 2020
Having already proposed the renaming of Christopher Columbus Park in Boston after Celtics-Great, Bill Russell, I will once again advocate strongly for the NBA logo to bear his likeness.

Folks responding to @Advil & @CelticsSentinel plea to have Christopher Columbus Park named after Bill Russell.
The time is right, and that time is NOW! @FCHWPO https://t.co/7sWY7KVFoL pic.twitter.com/8loOA0s2Re

Jerry West has been the image on the League's logo since 1969. The designer was Alan Siegel, and apparently Siegel had a reason for his choice (per sportscasting.com's Rick Thomas):

The image of West was chosen as the basis of the NBA logo because Siegel felt it best embodied the league’s dynamism and athleticism. The silhouette manages to convey power, movement, and grace all at once

West never made any money from his image representing the NBA, and he seems to have no strong feelings about remaining as the visual representation of the League.

“I don’t like to do anything to call attention to myself.” He (West) even went so far as to say, “In many ways, I wish they would [change the logo].”

Russ came to the Celtics in 1956 after winning gold in the Melbourne Olympics. In 48 games during his debut season, he averaged 35.3 MPG, 14.7 PPG and 19.6 RPG. In 72 games, fellow-rookie, Tom Heinsohn, averaged 29.9 MPG, 16.2 PPG and 9.6 RPG, walking away with Rookie-of-the-Year honors. But it was "Big Bill" that changed everything. He was a natural, and ferocious, rebounder. His elevation and timing on blocking shots were masterful, and his defense, both interior and perimeter, were unmatched for a big man in the 1950's.

Russ took a figurative beating from the media - and even some fans, in part because he was black and outspoken on racial issues. Admittedly, Russell could be verbally caustic, but he had to endure many written and verbal attacks during his time in Boston.

His 11 Championship rings tell the story. He was a winner on the court, and he dominated in his vital role with the Boston Celtics. I have argued that Russell could play, and dominate, in today's game. If Siegel fashioned his original logo based on Jerry West's "dynamism, athleticism, power, movement and grace", then I would argue that Bill Russell portrayed all of that. It is time to put the racism of the 1960's aside and acknowledge what this proud, intelligent man accomplished for the Celtics, the city of Boston and the NBA.

The possibilities for a Russell logo are endless, but it was his shot blocking that was such an innovation. Two potential choices can be found below: 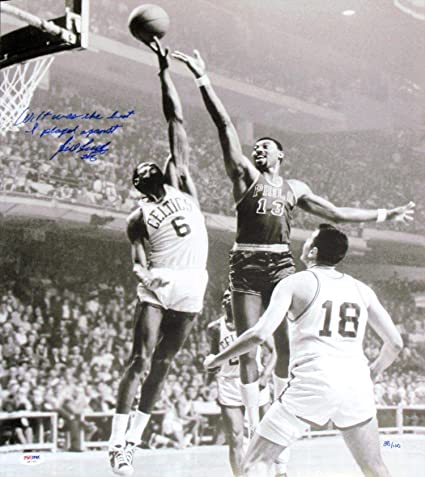