By Tom Lane July 29, 2020
Almost five months ago, I wrote that Brad Stevens needed to balance his top-heavy starting lineup, and now it appears I have a supporter for my idea from NBA TV's Sam Mitchell, who proposed having Gordon Hayward come off the bench to pair with Marcus Smart. 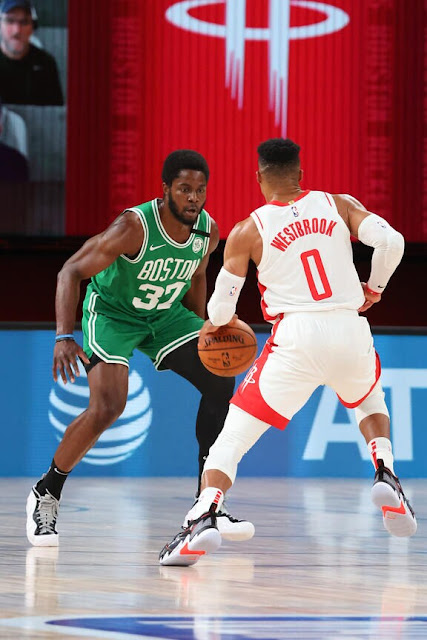 I had originally proposed the same move, specifically pointing to Semi Ojeleye as the new projected starter. This was my argument in March:

The Boston Celtics have generally had their top-4 scorers in the starting unit, and that may need to change. Jayson Tatum, Jaylen Brown, Gordon Hayward and Kemba Walker account for 82.4 points per game, while the Boston bench ranks 28th in points-production at 27.6 PPG.

You know I have broached this before. Only Gordon and Marcus have the mindset to come off the bench and not be hurt emotionally. The offense is too centered on the starting unit. Hayward's minutes should not drop though.

In last night's scrimmage versus the Houston Rockets, Semi scored 12 points on 4-of-8 from the field and 2-of-3 on treys. He took down three boards and racked up two assists, tied for plus-minus honors with a minus-11. Ojeleye will never be a volume scorer, but he doesn't need to be alongside Jayson Tatum, Jaylen Brown and Kemba Walker.

Heading towards his fourth year in the League, Semi is set to earn $1.8 million for the 2020-21 season, with a team option. His stellar 1-on-1 defense, terrific attitude, improvement on offense and team-friendly contract all say "Yes. Put him in the starting five."