Tommy Heinsohn never gets his due respect

By Tom Lane July 01, 2020
Isn't it time to recognize Tommy Heinsohn as a true Boston treasure? After starring at Holy Cross, Red Auerbach drafted him in 1956 with the Celtics' territorial pick, while also finagling a trade with the St. Louis Hawks to acquire Bill Russell. K. C. Jones and future Celtic, Willie Naulls (drafted by Hawks), were taken in the second round. Red was unmerciful with Heinsohn from the start, constantly berating him in front of the troops and bestowing on him the demeaning task of lugging the ball bag - not only in Tommy's rookie year but also in his sophomore season. The following from my interview with Sam Jones: 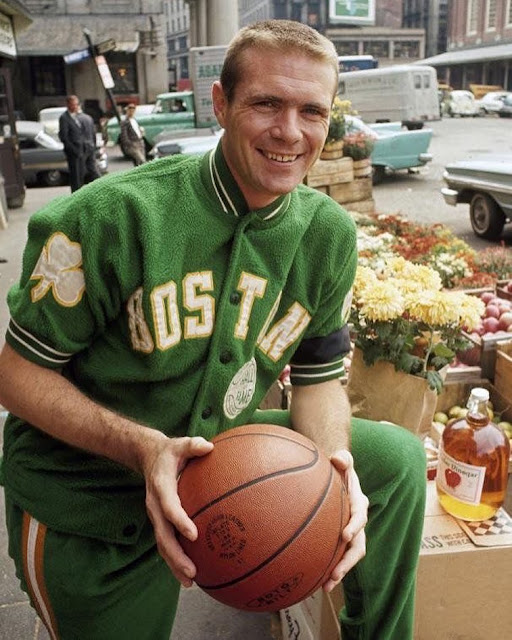 Tommy had a spectacular rookie season, putting up 16.2 PPG and hauling down 9.9 rebounds in 29.9 minutes per contest. His minutes increased to 37.0 MPG in the post-season, as did his points (22.9 PPG) and boards (11.7 RPG). In Game 7 of the 1957 Finals versus Bob Pettit's St. Louis Hawks, Heinie poured in 37 points and hauled down 23 rebounds in Boston's narrow, double-overtime 125-123 victory. But his output was somewhat overshadowed by Russell's 19 points and 32 rebounds. Tommy came away with the 1957 Rookie-of-the-Year Award, but many, including Russ himself, felt that the prize should have gone to Big Bill (per Wikipedia):

Russell had a more cordial relationship with many of his teammates with the notable exception of Heinsohn, his old rival and fellow rookie. Heinsohn felt that Russell resented him because the former was named the 1957 NBA Rookie of the Year. Many people thought that Russell was more important even though he had only played half the season. Russell also ignored Heinsohn's request for an autograph on behalf of his cousin and openly said to Heinsohn that he deserved half of his $300 Rookie of the Year check.

Heinsohn just could not catch a break. Carrying the ball bag for two consecutive seasons - belittled by Auerbach - and granted the ROY Award with a question mark and possible antagonism attached. But the 8-Time Champion and 2-pack-a-day smoker hung in as a Celtics player for nine seasons, retiring at the relatively-young age of 31. 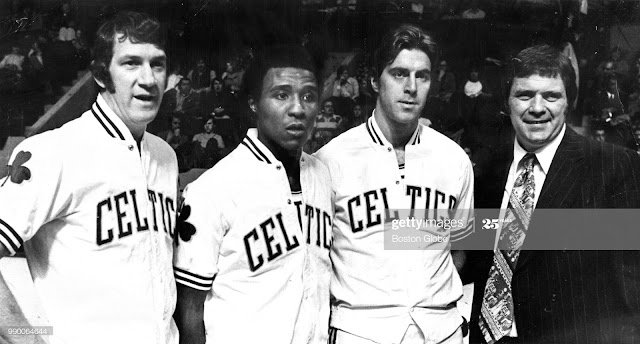 But Heinsohn was not done with Boston or the Celtics. After Russell's retirement as player/coach in 1969, Tommy was chosen to guide the team. The choice was subject to criticism (as always seems the case for Tommy), but Celtics Announcer, Johnny Most, got it right (from Mark C. Bodanza's Sam Jones bio, Ten Times a Champion):

To me, Heinsohn represents the closest total of Auerbach coaching attributes of all the ballplayers that played for him. I think Tommy will turn out to be the junior edition of the Redhead. He will fast break. He will torture them to superhuman rebounding efforts. He will go nose-to-nose with the officials. He will draw many technical fouls. He will be a proud advocate of wide-open, firehouse basketball, with an occasional explosion of Violence.

Red Auerbach ran his guys into the ground in practice and expected that pace to continue in real competition. "Wide-open, firehouse" basketball is what Most called it, and it was exciting to watch. Tommy would run with his teammates during games - that is until the negative effects of his smoking kicked in. Red once called Heinie "the oldest 27-year-old body in professional sports". But the guy could play. When he took over the reins in 1969 as coach, his players continued the fast-break protocol.

Henie racked up two more Titles (1974 & 1976) as Celtics coach, ending up with a 427-263 record over nine seasons. He was also named Coach-of-the-Year in 1973. Tommy was as animated on the bench as any opposing coaches, and usually more so. He used Auerbach's coaching tactics to the advantage of his team, including picking up technical fouls to purposely get tossed from the game.

He went into broadcasting in 1966, but that stint was interrupted by his 9-year tenure as Celtics coach. And as of this writing, he is still at it. But the criticism of Heinsohn continues. "Too much of a homer." "Analysis is too partisan." But as he approaches 86 years of age, I doubt Tommy cares much about what others think and write. His connection with the Boston Celtics spans six decades, and he has proven himself as a survivor. As an announcer, he still figuratively coaches the team, and he offers advice to the young guys that will listen. It is time this man gets his due. He is one of the most important individuals to ever be connected to perhaps the greatest franchise in the history of sports.