76'ers have no one to contain Jayson Tatum

By Tom Lane August 20, 2020
Jayson Tatum was virtually unstoppable in the Celtics 128-101 victory over the Philadelphia 76'ers last night. It seemed that everything he put up went in - 3-pointers, drives, layups, floaters, mid-range shots. In 30 minutes of action, he poured in 33 points on 12-of-20 from the field and 8-of-12 from 3-point land. Tatum also came away with a team-high plus/minus of +29, along with five rebounds and five assists. 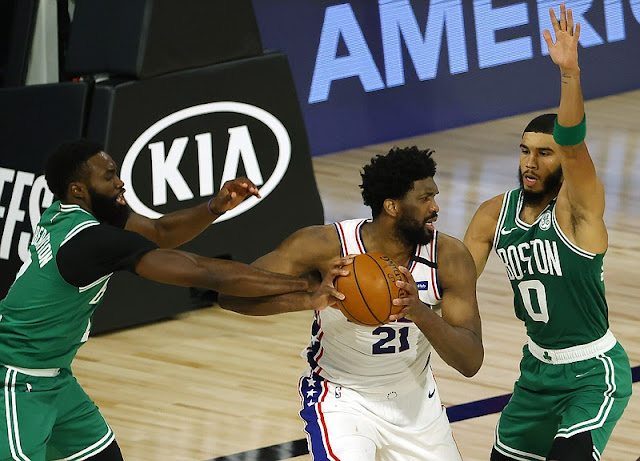 Philly coach Brett Brown injected Matisse Thybulle into the starting lineup in place of former-Celtic, Al Horford, most likely due to Horford's difficulty in countering the offensive threat from the Jay team, Jayson Tatum and Jaylen Brown. It didn't work. Philadelphia more than held their own in the early going, but they had little chance after that.

One specific play mirrored the tone of the entire game. At the 7:53 mark of the third quarter and Boston ahead 72-59, Kemba Walker stole the ball from Joel Embiid, with Tatum gaining possession. Jayson whipped a looping pass to a breaking Jaylen Brown for the 360-degree dunk. The Celtics were all but toying with the helpless 76'ers.

It can be argued that the presence of the injured Ben Simmons may have made a difference in this one, but Jayson Tatum was on fire, and it appeared that no defender could have stopped him. I can't recall a Celtics player being in this kind of zone since the heydays of Paul Pierce and Larry Bird. Expect to see a lot more of this level of play from this super-talented youngster.