Celtics undefeated in post-season, but bench remains a concern

By Tom Lane August 31, 2020
The Celtics' starting-5 proved dominant in their Eastern Semi-Finals opener versus the Toronto Raptors. Boston took down Toronto 112-to-94 and led by as many as 40 points at one juncture. To start the game, Coach Brad Stevens put virtually all of his potent weapons out there in the persons of Kemba Walker, Jayson Tatum, Jaylen Brown, Marcus Smart and Daniel Theis - who combined for 90 of Boston's 112 total points. 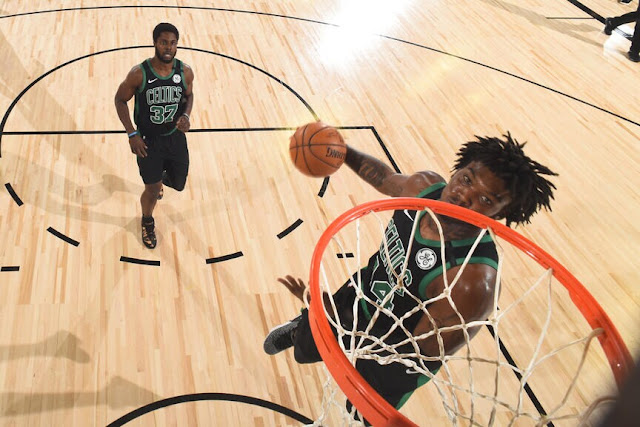 The Celtics major arsenal consists of the Jay team and Walker, but Smart and Theis were key parts of Boston's attack in this one. Smart notched 21 points on 6-of-10 from the field, 5-of-9 on treys and a perfect 4-of-4 from the foul stripe. He simply looked comfortable out there shooting the ball. Theis was solid, putting up 13 points, 15 boards, one steal and two blocks.

The Celtics' top scorer off the pine was Rob Williams with 10 points. He also managed five rebounds, two assists, one steal and two blocks. He was effective out there. Brad Wanamaker had a line of seven points and six assists. Semi Ojeleye logged 22 minutes - played his usual tough defense - but managed a mere three points.

The good news is that the Boston Celtics are playing the right way on both ends of the court and truly look like a legitimate Title contender. But with Gordon Hayward out of action for an undetermined amount of time, their hold on control of their post-season future is tenuous. An injury to any member of the present starters could mean disaster for any Championship hopes.

Enes Kanter never saw the floor last night, and Grant Williams put nothing on the board in eight minutes of play. Brad Wanamaker remains a stable cog off the bench, but I can't envision him in the starting unit if an injury to Marcus or Kemba occurred. Ditto for Rob if Jaylen, Jayson of Daniel ever went down. The Celtics are due for some good fortune, so we keep our fingers crossed as the 2019-20 version of the Guys in Green advance through the post-season.