By Tom Lane August 20, 2020
The Celtics blowout 128-101 win over the Philadelphia 76'ers last night demonstrated - among other things - that Boston may have no stars coming off its bench, but it appears that coach Brad Stevens intends to employ his "Pine Troops" in specific matchups and situations. Eight Celtics subs logged a combined 107 minutes in the victory, partly due to the large point differential. And the 41-point production from the eight bench guys far exceeded the combined eight points from the series opener. 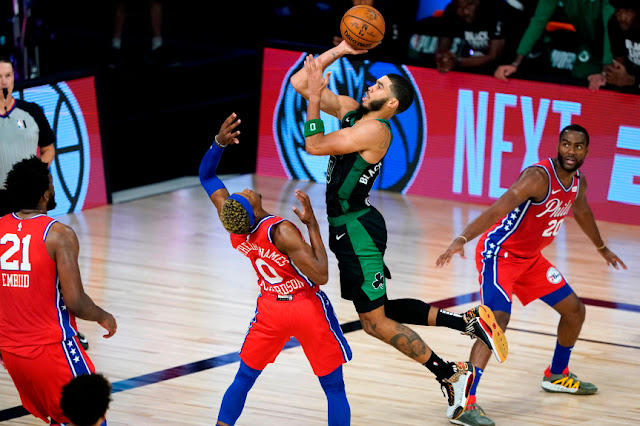 Grant Williams (9P, 6R, 2A), Brad Wanamaker (7P, 2R, 4A), Enes Kanter (10P, 9R) and Romeo Langford((6P, 1R) all logged 20-or-more minutes. GWill, Kanter and Wanamaker all made significant contributions. Kanter was on his offensive game last night, and it showed. Semi Ojeleye and Romeo Langford also got into the action, contributing mostly on the defensive end.

The loss of Gordon Hayward for roughly four weeks will have a significant negative effect on the team's performance in the coming weeks, but thus far, the crew that Stevens is putting out there is having great success against their long-term rival 76'ers. Another positive aspect of the Celtics current situation is Marcus Smart being moved from the bench to the starting unit. His offensive game remains sporadic, but his intensity and defense right out of the gate is something I regard as a positive move. But even that may change, depending on future matchups.

the block AND awareness to close out the shooter 👀 pic.twitter.com/8jatqUSiqh

Kudos to Brad Stevens. The Celtics weak bench has been an issue all season long, but it seems he is tossing aside his rather-mechanical substitution patterns and putting in his bench players for specific reasons at opportune times. In the end, that may make all the difference in the final outcome of the season for his team.