By Tom Lane August 23, 2020
When it comes to the Jay Team, it is Jayson Tatum that garners more attention, but his teammate, Jaylen Brown, has quietly elevated his game and appears to be also heading towards super stardom. 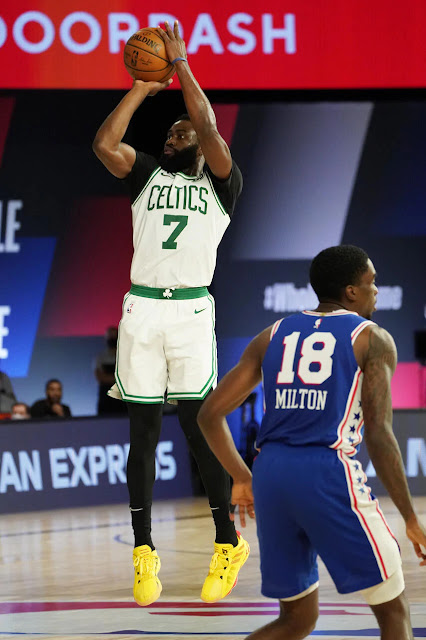 In the regular season, Brown logged an average of 33.9 MPG while producung 20.3 PPG, 6.4 RPG, 2.1 APG and 1.1 SPG. He shot .481 from the field, .382 on treys and .724 from the foul stripe. In slightly elevated minutes (36.3 MPG) in the Philadelphia series, his numbers are almost identical, with the most-outstanding number being his playoff free throw percentage soaring to .952.

In my interview with Brian Scalabrine prior to the 2018-19 season, Scal was bullish on the Jay Team. His accolades may be heading towards reality:

Brian Scalabrine: "Jaylen (Brown) can be - gosh - I hate using Michael Jordan, because I don't think he can be Michael Jordan -but the way he plays, and moves - and see how he jumps in the air - ever remember when Jordan would jump and and elevate, kind of float, keep the ball high in the air. Jaylen does that a lot. I hate doing that (Jordan comparison) - Jordan - best player ever - he (Jaylen) can be more of his version of Jordan - more catch-and-shoot - he has that defensive mentality - watch the way they both (Jaylen and Jayson Tatum) get in that defensive stance - both those guys (Jay-Team) have a tremendous upside - tremendous - more than anything, it's how hard they work - their mentality - at a young age I look at body and mentality - athleticism - both of those guys have a great head on their shoulders - not good, it's great."

Brown has definitely been working on his game. His concentration and poise out there have definitely improved. The tentativeness I witnesed in past years has disappeared, and he exudes confidence, one of the most-vital qualities for a superstar. And as Scal indicated, both Jaylen and Jayson "have a great head on their shoulders". While combining confidence, talent, mindset and intelligence, neither member of the Jay Team has reached his peak. I can only imagine what that may be.