By Tom Lane August 22, 2020
Kemba Walker may have been the star of the game last night (24P, 8R, 4A, 2S, 1B) in Boston's 102-94 victory over the Philadelphia 76'ers, but Marcus Smart was simply a Defensive Demon who would not let this game slip away. Smart finished with 14 points, eight rebounds, three assists and three steals, but his key plays at the end of quarters two and four really got our attention. 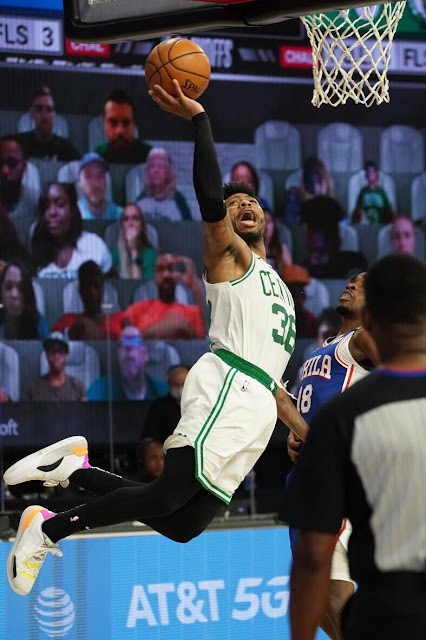 At the 1:10 mark of the second quarter, and the score at 49-46 in favor of Boston, Marcus stole the ball and got it to Jaylen brown for the slam. Then with 1:39 remaining in the game and the Celtics trailing by two points (92-94), Smart made another steal - once again getting it to Brown for a layup.

But Smart wasn't done yet. With 36 seconds left in the game, he drove and was fouled, making both free throws. He also picked up two more rebounds in the closing seconds and made two additional free throws after being fouled by Al Horford.

Kemba Walker on Marcus Smart: "I’m glad he’s on my team, I’ll tell you that. He’s so special. Defensively, he’s a monster. … That man can guard anyone in the world. I can’t see how he’s not in the Defensive Player of the Year conversation. I can’t see it."

I have a few arguments in favor of Marcus never being traded or allowed to walk away in future free agency. First of all Danny Ainge loves this guy - as do most Celtics fans. Secondly, as Kemba stated, I would hate to see Smart on a rival team pitted against the Celtics. He has a quiet ferocity about him that I love and admire. Long may he remain with The Green.