Toronto Raptors have a long bench, but Celtics have Jayson Tatum

By Tom Lane August 24, 2020
After their sweep of the Philadelphia 76'ers last night, the Celtics will face the Toronto Raptors in Game One of the Eastern Semi-Finals at 6:30 P.M. on Thursday, August 27. Most analysts view the team match-ups as somewhat even and project the series to go seven games. 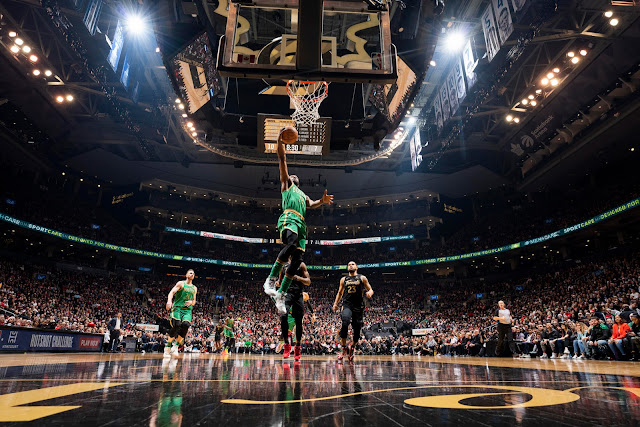 The Celtics Gordon Hayward (Grade 3 ankle sprain) is expected to be out for the entire series, and Toronto point guard, Kyle Lowry, suffered an ankle injury last night in the game versus the Brooklyn Nets. His status is yet unknown.

To say that Boston's bench may be over-matched in this series could be an understatement. In their Game Four victory, the Toronto bench accounted for 100 of the Raptor's 150-point total. Six Toronto players logged double-digit minutes off the bench. For the Celtics, Game Four saw only two subs (Enes Kanter and Brad Wanamaker) on the floor for double-digit minutes. Boston's bench scored a mere 11 points to Toronto's 100. Conversely, Norman Powell and Serge Ibaka combined for 56 bench points for the Canadians.

Lowry's potential absence from part, or all, of this series would obviously have a negative impact on Toronto's chances. Stay tuned for updates on his status.

First time for everything. See you soon, @Raptors ☘️🦖#BleedGreen pic.twitter.com/AC3khYXMYa

For the Celtics, Jayson Tatum will be relied upon heavily to put points on the board, particularly since there appears to be no Boston bench player capable of extended minutes and volume point production. Jayson seems to be able to get off a good shot, even under intense defensive pressure. He has definitely become a reliable closer for his team.

The Raptors rely heavily on their fast break, but a Lowry-less lineup might slow that down. On the plus side for Boston, point guard Kemba Walker looks healthy and is finding his pace. The trio of Walker, Tatum and Jaylen Brown can hopefully overcome Boston's lackluster (thus far) bench. And Marcus Smart is due for at least one or two breakout offensive games in the near future, but beyond that, he can always be counted on for his disruptive defense and ferocity. This Eastern Semi-Finals series shold be a good one.