With Gordon Hayward out four weeks, it's bench time

By Tom Lane August 19, 2020
Gordon Hayward has been diagnosed with a Grade 3 ankle sprain and is exected to be out of action for at least four weeks. Coach Brad Stevens has been given no choice. In Game One of the Philly series, the starting five accounted for 101 of the Celtics' total of 109 points. Boston's Critical Core of Walker, Smart, Brown, Tatum and Hayward logged 203 of a possible 240 minutes. Time to look to the bench for much-needed help. 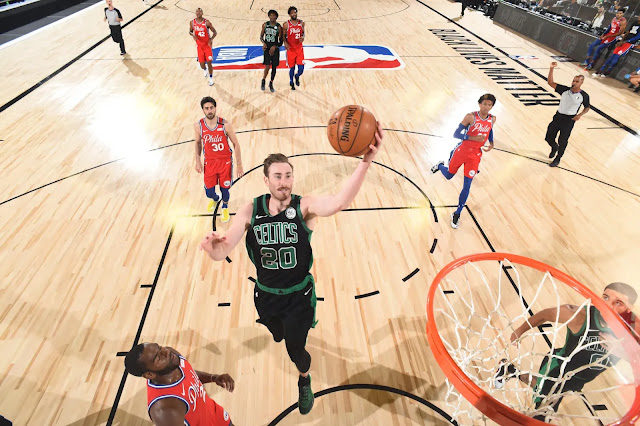 Despite Boston's win in Game One, Joel Embiid had his way in the early going. He could not be contained down low. Expect that to change in Game Two of the series. The Celtics simply do not have the size to contend with Philly's big man, but they do have the strength in Marcus Smart and Semi Ojeleye. Expect both to have a shot at slowing down Embiid.

Brad Stevens' strategy of employing a 6-man rotation in the series opener was never going to work long-term. Fatigue and injuries would eventually have reared their ugly head. Celtics back-up center, Enes Kanter saw only eight minutes of action in Game One and went scoreless, and if Enes is not scoring, he's not helping the cause. Rob Williams still has mental lapses out on the court, but he should be given more floor time. It is time to determine whether he is simply an athletic freak or a legitimate NBA-caliber talent. Ojeleye was DNP-CD in the opener, and that should not happen. Embiid can be worn down mentally and physically, and Marcus and Semi would be my candidates to accomplish that.

With Hayward our it’s time to see “playoff Williams”

I don’t care which one.

Putting Marcus Smart into the starting lineup to replace Gordon Hayward would seem to be the best option. Bringing Semi and Rob off the bench gives Brad at least a 7-man rotation, and throwing Kanter out there for limited minutes and getting the ball to him down low just might work. Brad Stevens is one of the brightest minds in the NBA coaching ranks, but his tentative and rather-mechanical substitution patterns often leave room for criticism. We may see that change tonight.