A total of 32 assists for Miami and only 24 for Boston is only part of the story for the Celtics 117-114 loss to the Heat in overtime last night. Team highs in assists were shared by Miami sophomore center, Bam Adebayo, and rookie Tyler Herro with nine dimes each. 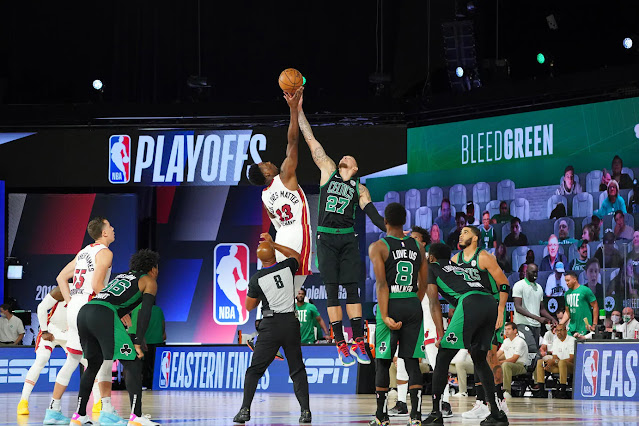 Celtics point guards, Kemba Walker and Brad Wanamaker,  shared assist honors with each notching six, but frankly it appeared that Kemba was forever pounding the ball trying to get loose for open shots. He did put 19 points on the board, but it took 19 attempts to accomplish that. He was 6-of-19 from the field and a woeful 1-of-9 on 3-pointers.

To Wanamaker's credit, he had a solid game, notching 11 points, three rebounds and five steals, in addition to his team-high six assists. With Boston's shallow bench, he has been a mainstay for Boston in the post-season. Jayson Tatum picked up five dimes for the Celtics, also coming away with a team-high 30 points, 14 boards, three steals and two blocks. But as Isiah Thomas pointed out on NBA TV, Marcus Smart was wide open when Jayson launched a potential go-ahead 3-pointer as regulation time expired with the score tied. That 6th-assist-that-never-happened may have been the key to a win.

Whenever it happens, Gordon Hayward's return to action never seemed more vital than last night. Miami's rookie, Tyler Herro lived up to his last name when he came off the bench to put up a near-triple-double of 12 points, 11 rebounds and nine assists in 40 quality minutes. Boston has no one on their bench that can do that - not yet. Gordon's return, when (or if) that occurs, will make a significant difference in the Celtics coming out of the East.

It appears Boston really has no solid answer for Miami center, Bam Adebayo (18P/6R/9A/1S/2B). He is strong, multi-skilled and intense. But they will have to do a better defensive job on Goran Dragic and former-Celtic, Jae Crowder. Dragic, particularly, was responsible for getting his team out of a hole in the early going. The Celtics lack of ball movement is an easy fix. The bench? The answer to that lies with Hayward, but his return timeline remains murky.