Sluggish third quarters have plagued the Boston Celtics in Games One and Two of the Eastern Conference Finals versus the Miami Heat. In Boston's 117-106 victory last night, coach Brad Stevens went with his small-ball center, rookie Grant Williams at the 9:22 juncture of the third quarter. 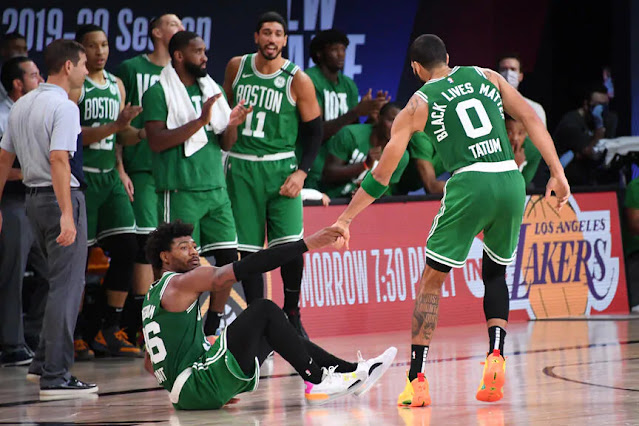 Williams wasted no time getting on the board, hitting a 3-pointer from the corner 21 seconds after entering the game. He scored again, this time on a hook shot under the basket - grabbed a defensive rebound - and made a key steal before being replaced at the 1:49 mark.

Inserting the 6'6" rookie against Bam Adebayo in the critical third quarter of a do-or-die Game 3 tells us a lot about Grant's future with the Celtics. His post-season production doesn't jump off the page (3.4 PPG, 1.6 RPG), but in 10.7 minutes per game, he is shooting .600 from the field and .625 from beyond the arc.

Williams plays the game with energy and enthusiasm, and he shows a lot of poise for a first-year player. Semi Ojeleye never left the pine last night, and his .250 playoff accuracy from the field and .217 from deep may be part of the reason. Neither player is expected to be anything close to a volume scorer, but it seems that Grant can be counted on to connect on his rare shot attempts.

It just may turn out that Grant Williams may turn out to be that 3-and-D guy to come off the bench for his defense and distance marksmanship. The downside is that it seems like Semi Ojeleye is taking a back seat, at least in this series.