By Tom Lane September 08, 2020
Brad Stevens has been critical of the energy and effort of his troops in the first and third quarters in the Eastern Semis versus the Raptors. But not in Game Five last night. The Guys in Green gave all they had for most of the game and showed the Toronto Raptors "No Quarter". The Celtics were taking no prisoners in this contest. 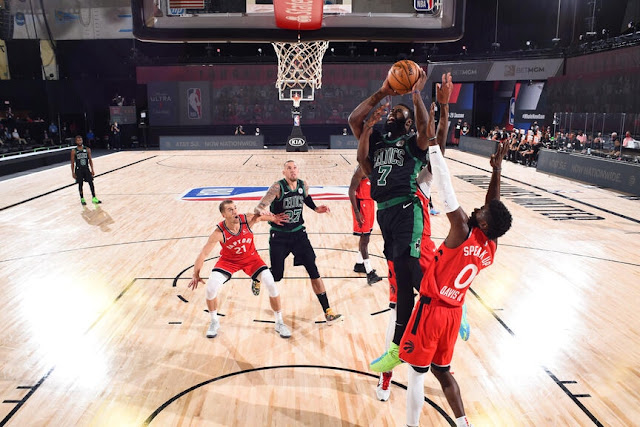 Jaylen Brown kicked things off with a 3-pointer, assisted by Marcus Smart, in the first 19 seconds of action. Jaylen set the tone from the start, finishing the game with a team-high 27 points on 10-of-18 from the field, 3-of-7 from 3-point land and 4-of-4 from the foul stripe. Marcus had a solid outing with a line of 12P/7R/6A. Boston's defense was stifling, and the half ended with the Celtics up 87-63.

Things got a bit sloppy in the third quarter, and when Toronto cut the lead to 22 points, Brad Stevens had seen enough and called a time out at the 8:05 juncture. Brad's guys got back on track and never let this one slip away. The Celtics refused to get complacent with their large lead and kept the pressure on, winning the game with a final score of 111-89 and taking a 3-2 lead in the series. This Celtics team was not about to give any quarter to the opposition, and in past times, we may have heard El Deguello (No Quarter) on the Jumbotron.

Kudos to starting center, Daniel Theis. He did it all in this game, finishing with 15 points and hitting all five of his field goal attempts, while also garnering eight rebounds. He had only one assist, but it was a beauty, hitting Brown for a layup under the hoop at the 3:37 mark of the fourth quarter. Jayson Tatum had a double-double with 18 points and 10 boards, while Kemba Walker finished with 21 points, four rebounds and seven assists.

Brad Wanamaker was the only Boston substitute to log double-digit minutes. He was on the floor for 28 minutes, and put up a line of 15P/3R/2A. Rob Williams only saw eight minutes but grabbed four rebounds, one of them being an in-traffic offensive board in the fourth quarter. Rob received some significant accolades from the announcers for his contributions in this series.

The Celtics played like potential Champions in this contest, mainly because of their energy and synergy. They played hard for most of the game, and they played as a team. Almost everything they did seemed to click. Brad Stevens wants no part of a repeat of the lackluster effort of Game Four. I doubt we will see that again.