Celtics weaknesses exposed in playoffs, but no radical fixes required

One of the NBA's truest adages is, A team's weaknesses get exposed in the post-season. The Celtics struggles against the Miami Heat made it quite evident that lack of a dominant center and a shallow, non-playoff-worthy bench made the Boston's Celtics vulnerable. 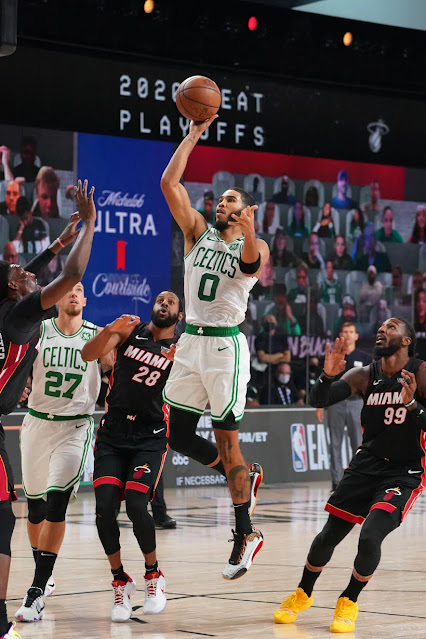 Miami's third-year center, Bam Adebayo gave Boston trouble all series long. In the Heat's 125-113 closeout of Boston last night in Game Six, Bam's line included 32 points, 14 rebounds and five assists. He shot 75% from the field and 10-of-11 from the free throw line. All he lacks is a 3-point shot. The line supplied by Boston's center quartet of Daniel Theis, Enes Kanter, Rob Williams and Grant Williams (combined 41 minutes)? 11 points, 16 boards, one assist. It must be added for those that think the Celtics would have fared better against the Lakers Anthony Davis have to be delusional.

Now to the benches. The Heat had both rookie Tyler Herro and veteran Andre Iguodala coming off the pine. They combined for 61 minutes, 34 points, eight rebounds and eight assists. The Celtics bench, playing the same combined 61 minutes, comprised Gordon Hayward, Brad Wanamaker, Enes, Grant and TIMELORD and contributed 17 points, six rebounds and three assists. Hayward was the sole substitute to log more than 10 minutes. He played 32 minutes.

After the Celtics being ousted last night, Danny Ainge's brain is already in gear for the start of next season - which is already on the horizon. Theis has a $5 million, non-guaranteed contract for the 2020-21 season. That is a bargain for Boston, and Ainge will fully-guarantee that sum. Kanter is signed for the same amount, but he has a player option. If Enes picks up that option, he will be traded. With a strengthening program for Daniel in the brief off-season and further progression of the Celtics youngsters, a major fix at the center spot may not be needed, but expect Danny to at least look into a trade for a dominant big man.

With the exception of  Hayward, it is obvious that Brad Stevens has little faith in having other bench players out there for any significant time. And without the sudden surge of one of the young guys, don't expect that situation to change. The addition of a savvy, playoff-hardened vet off the bench became apparent in the Eastern Finals. Romeo Langford could possibly evolve if he could shed the injury bug, or Ainge could get lucky with the 14th pick in the upcoming draft. Hell, rookie sensation, Tyler Herro, was grabbed by the Heat with the 13th pick (just before Boston chose Langford) in last year's draft.

The 2020-21 NBA season is scheduled to start no sooner than December 25, 2020. That season has already begun in the super-active minds of Danny Ainge and Brad Stevens.