In the third quarter of a critical Game Five last night, the Boston Celtics came out and looked like a team reborn.  Daniel Theis, who had been pulled out at the 8:13 mark of the first quarter, started to assert himself in every part of the game - setting screens, hitting the boards, blocking shots and looking to score (per NBA's Steve Aschburner): 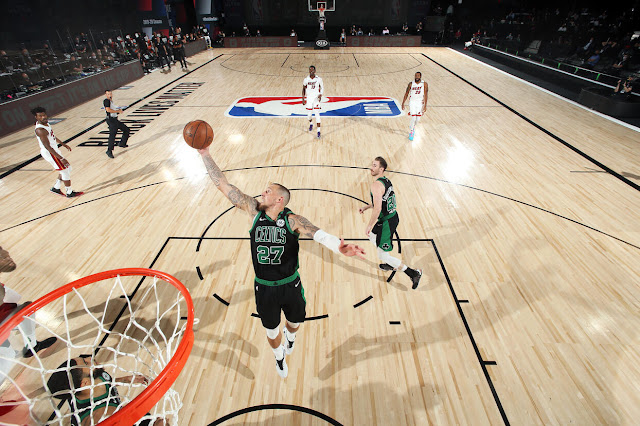 Meanwhile, Boston was pushing into the paint, going to center Daniel Theis in the heart of Miami’s defense. The 6-foot-8 native of Salzgitter, Germany, in his third NBA season at 28, contributed six points, two offensive rebounds and a couple of blocks while playing all but 39 seconds of the quarter.

Theis had been averaging 6.5 points and 0.5 blocks per game through the series’ first four games. After being a cumulative minus-9 in those games, Theis was plus-16 Friday, behind only Walker’s plus-21.

Besides being yanked early in the first quarter, Daniel was also taken out at the 9:48 mark of the second period in favor of Enes Kanter - after which Enes went on a roll, scoring eight points and taking down four rebounds before the end of the half. I doubt Theis wanted to leave the game so hurriedly in the second half

Theis finished the game with 15 points (6-of-10 on FGs), 13 rebounds, three blocks and a plus/minus of +16. The Celtics center tandem of Theis and Kanter came through in this one to ensure the victory. And credit Brad Stevens for loosening up his somewhat-rigid substitution patterns to gain an advantage over Erik Spoelstra and the Heat. I doubt we will see any letdowns for Game Six on Sunday.