Marcus Smart has morphed into a complete player in Raptors series

By Tom Lane September 12, 2020
The Celtics elimination of the Toronto Raptors last night in the seventh game of the Eastern Conference Semi-Finals reveals a few things about the 2019-20 version of the Boston Celtics. One of the most vivid revelations is the transition of Marcus Smart into a complete player (per Wikipedia):

Kemba Walker: "It's exciting. It's energizing. He (Marcus Smart) just gets everybody going. Gets us going, gets the crowd going. Like I said, we just kinda feed off him. He just does so many great things. And propels our defense each and every night." 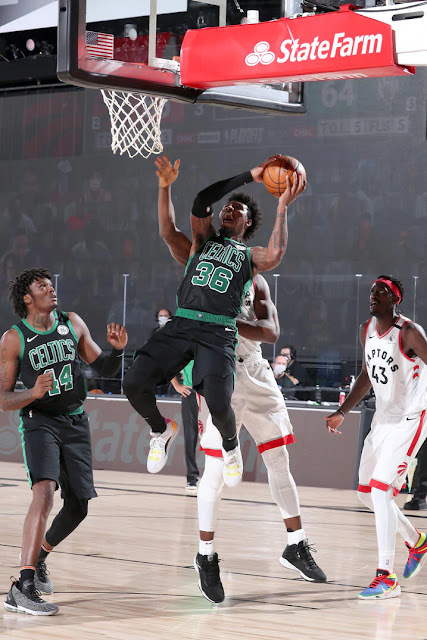 In last night's 92-87 victory, Marcus put up 16 points, grabbed two rebounds and handed out six assists. But it was his three steals and one block that were so instrumental in the win. His first theft came at the 9:15 mark of the first quarter, after which he went full court for a layup. His second steal came in the second quarter and he then delivered a perfect lob pass to Jayson Tatum for the score. Later in the second period, a steal by Jaylen Brown produced a loose ball, after which Smart did his best Dave Cowens impression, outrunning two Toronto players to gather the loose ball and lay it in. His third steal came at a critical juncture in the fourth quarter and Boston leading by only four points, 82-78.

But it was Smart's block on Norman Powell with 58 seconds on the game clock and the Celtics leading 89-87 that got everyone's attention. The rejection was clean, precise and a work of art. Victory for Boston was virtually sealed by that one play.

When the Celtics needed it most, Marcus Smart came through with the block 🖐 pic.twitter.com/rpeKkgjRoS

Smart has received accolades for his tough, tenacious defense since his entry into the League, but his offensive game has often generated gripes and groans among the Boston faithful. Not so much any more. I have argued that Smart needed to raise his field goal percentage to at least 40% in order to be labeled a complete player. Well, he is hitting 41.7% % from the field in the Raptors series and 39.3% from beyond the arc - all while averaging 15.7 PPG, 6.0 RPG, 5.1 APG, 1.1 SPG and a plus/minus of +9.1.

Marcus is the lone "little guy" on this season's All-Defensive first team, joining Giannis Antetokounmpo, Anthony Davis, Ben Simmons and Rudy Gobert. And many observers feel he should be the recipient of the Defensive Player of the Year award. But he has worked diligently on his offensive game, and it has been evident in this series. Marcus brings it all - talent, toughness and tenacity. I simply can't envision Danny Ainge letting him walk away under any circumstances.