By Tom Lane September 04, 2020
After two DNP-CDs in Games One and Two of the Eastern Semis versus the Toronto Raptors, Celtics backup center, Enes Kanter logged a mere four minutes in Boston's 104-103 loss to the Raptors last night. He was not effective. Coach Brad Stevens inserted Kanter into the game to counter Toronto's zone defense. It backfired. 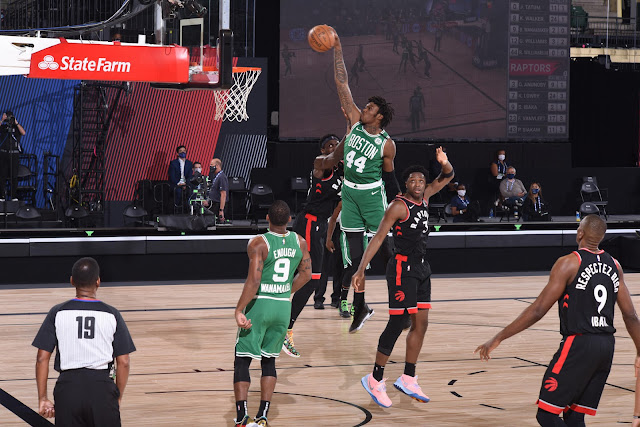 Enes managed four points and one rebound in his limited minutes, but the Raptors offensive attack went right at him, starting at the 4:13 mark of the third quarter when Toronto guard, Fred VanVleet, drove into the lane and was fouled by Kanter. With Toronto consistently attacking the basket, Enes was slow in reacting.

Then with less than one second remaining in the game and the Celtics leading 103-101, Stevens put Tacko Fall in to cover Kyle Lowry on the inbounds pass. the idea being that Fall's Wall of defensive coverage being roughly 10 feet by eight feet was sufficient to squash any chance of a successful inbounds pass and 3-pointer by the Raptors. The strategy failed as Lowry directed a perfect cross-court pass to O G Anunoby who launched a 3-pointer as time expired.

The Celtics-Raptors series is making it quite clear that centers Kanter and Fall frankly don't fit Brad Stevens vision of quick, mobile and versatile lineups. For Boston, they are, at best, situational centers. Kanter's strengths are rebounding and inside scoring, but his lack of quickness often makes him a liability on defense. That has become very apparent in this series.

In Tacko's defense, there was little more that he could have done in his less-than-one second at such a crucial juncture. Give Lowry and Anunoby credit for an electrifying play. But the fact remains that these types of situational plays are what may keep Tacko in the NBA. This one - at least - didn't work.

With four rookies presently on the Celtics roster, and more to possibly be on board in the near future, I believe the chance of seeing both Tacko and Enes on the parquet next season are slim. They simply do not fit Brad's vision of quickness, mobility and versatility.