Slowing down Bam Adebayo will be Celtics biggest challenge vs. Heat

By Tom Lane September 14, 2020
The Celtics are set to kick off the Eastern Conference Finals versus the Miami Heat tomorrow night, and the series may well go the full seven games. The Heat rely on Jimmy Butler for everything but 3-point shots, and he is definitely a key for Miami. But the Celtics have no one in the mold of second-year center, Bam Adebayo. 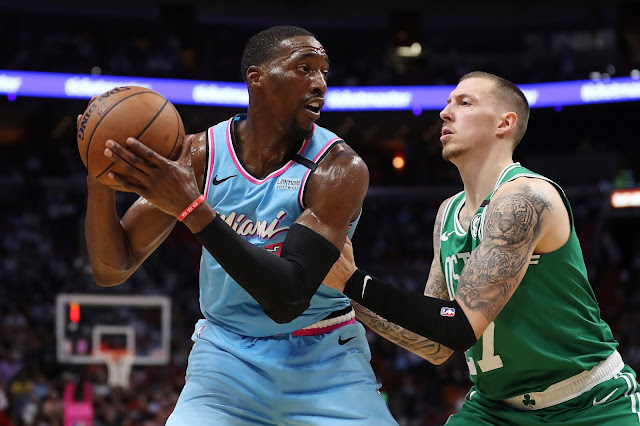 Bam is another non-distance shooter, but he has put up 16.2 points per game in the postseason on 54% from the field. He sits behind only Giannis Antetokounmpo in rebounds pulled down in the playoffs (11.7 RPG - 7 or more games played). Oh - yes, and he is a decent assist man, passing off for 4.8 assists/game in the playoffs. He is a handful down low, on both ends of the floor. He is strong and versatile. He will be a tough assignment for Daniel Theis and Rob Williams.

Bam Adebayo in his first year as a full time starter:

It gets worse. Covering the perimeter is going to be a real chore for the Guys in Green. Goran Dragic, Tyler Herro, Jae Crowder and Duncan Robinson are hitting 38%, 40%, 40% and 39%, respectively, from beyond the arc thus far in the post season. Focusing on Bam and Jimmy Butler could prove disastrous for Boston.

Herro (14.7 PPG, 4.9 RPG, 3.3 APG in post-season) is a rookie but hasn't played like one. Robinson is in his second season and is averaging double-digit points in 26 minutes per game. The Celtics have no one putting up double-digit points other than Kemba Walker, Jayson Tatum, Jaylen Brown and Marcus Smart. The Miami Heat definitely get the nod for having a better bench.

The Toronto Raptors box-and-one defense threw a real wrench into Kemba Walker's production in that series, and he is due for a breakout. There isn't a team in the League that can stifle the offense attack of the Jay Team for very long. And we can expect Smart to guard every position - and most opposing players - with his usual ferocity. Boston needs a fifth double-digit scorer, and his name is Gordon Hayward. He would make the difference.