Will Brad Stevens' Theis/Williams center triad survive the post season - and beyond?

By Tom Lane September 06, 2020
Enes Kanter averaging one minute per game thus far in the Eastern Semis versus Toronto tells us all we want to know about his future with the Boston Celtics. Brad Stevens has little faith, at least for this series, in the likable Turk. 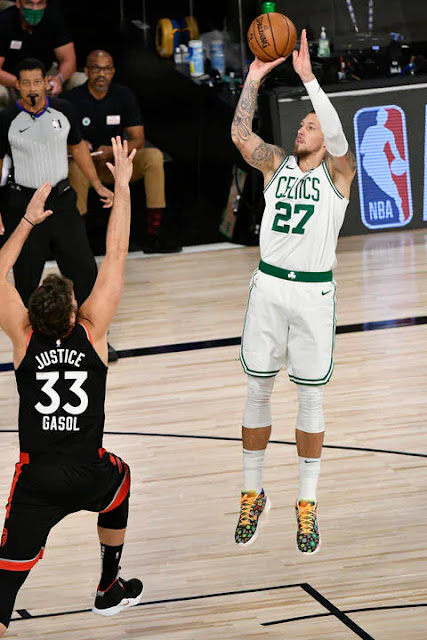 The Celtics allowed the Raptors to even the series at 2-2 last night, dropping Game Four with a score of 100-93. One of the few bright spots was the play of sophomore Rob Williams. Rob logged 15 minutes, entering the game early in the first quarter (9:26 mark). He scored six points on 3-of-4 from the field, gathering five rebounds in the process. Noteworthy was the fact he only picked up only one foul for the game. He is learning not to go for fakes and not to try to block every shot. He had no blocks in the game, but he is providing decent coverage both down low and on the perimeter.

Rookie Grant Williams picked up 12 meaningful minutes in the loss, coming away with four points and two boards. The Williams duo's combined 27 minutes of play overrode Theis' 25 minutes, and we can expect to see similar minutes from the center triad in Game Five of the series.

Rob Williams is still a work in progress, but he continues to improve on both ends of the floor. Experience will generate more savvy, and I view him as a keeper for Danny Ainge. Grant already has a decent basketball IQ as a rookie. He may never be a star, but he just may stick on the Celtics roster. It may come down to a choice between Grant Williams and Semi Ojeleye for next season.

Theis produced eight points, seven boards, one assist, one steal and one block in the game, and we can assume that he has peaked this season. Though somewhat undersized at 6'8", he has enough quickness and mobility to fit in quite well with what Stevens wants to accomplish. But the question remains whether the Celtics can succeed long-term going with this kind of minutes-sharing at the 5-spot. This series may decide that question.