With ankle stabilized, Gordon Hayward injects stability into his team

Roughly one month following his Grade 3 right ankle sprain, Gordon Hayward was back in action in last night's 117-106 win over the Miami Heat. That type of severe sprain normally requires a few months of recovery, but the Celtics guessed he would be back in four weeks, so we will take the optimistic projection becoming reality. 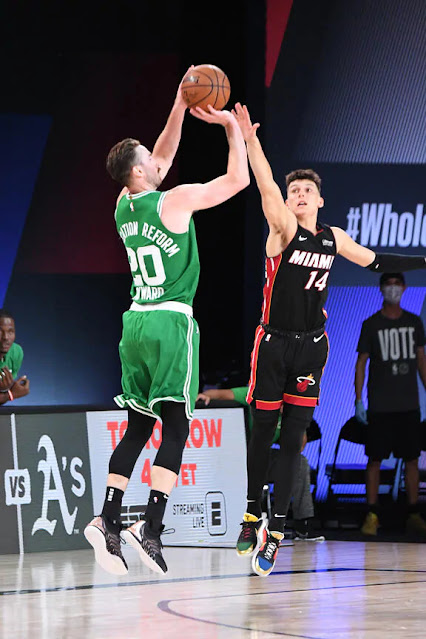 Gordon's stat line in 30 minutes of play was modest, but his impact on this game and hopes for a Title are not. For the first time since Hayward's injury in Game One versus the 76'ers, Boston had a legitimate 20-point scorer coming off the bench. Miami has rookie Tyler Herro as their main threat off the pine, and he has done a fantastic job for the Heat, logging 36 minutes last night and coming away with 22 points, three rebounds and four assists. That would be a typical line for Gordon once he sheds a bit of rust.

The Celtics without Hayward looked omnipotent in their 4-0 sweep of  Philadelphia, but they looked vulnerable in their 7-game series versus the Raptors. Ditto in their first two contests against Miami. Gordon brings his 3-point shooting, passing, rebounding and ball-control to the game, but it is the stability he brings to a team in need of it that stands out.

Jayson Tatum on Gordon Hayward: "We're so much better when he's out there, so much more dynamic, so much more versatile ... To have him back is everything."

With the ball in is hands, Hayward may appear to be a bit slower than his colleagues, but his decision making is not. He sees the floor very well and reads the movements of his teammates. With all of his attributes, he simply stabilizes the team and makes them a real threat to challenge for Title #18.