Don't expect to read about any outrageous Celtics moves in this blog. I am not saying they won't happen because, after all, we are talking Trader Danny here. But bringing bruising center, Aron Baynes, back into the Celtics fold is doable and may be one of the roster tweaks that brings success. 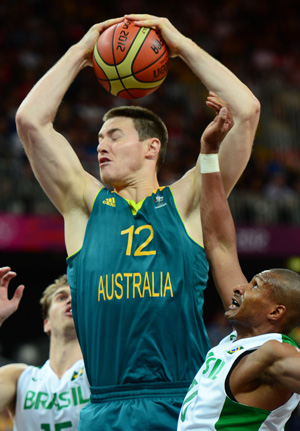 With all of the talent on the present Boston roster, the team still lacks strength and physicality. Baynes possesses both of those qualities. Heading back in time to the 2007-08 Championship season, the Celtics did very well with Kendrick Perkins at the center spot, despite Perkins' weakness as a scorer from any distance. But Kendrick was tough and fit nicely alongside Kevin Garnett, Paul Pierce, Ray Allen and Rajon Rondo. Baynes can do likewise partnering with the Jay Team, Gordon Hayward (if he sticks), Marcus Smart and Kemba Walker.

Reacquiring Baynes-ey, possibly with the mid-level exception, would not suddenly propel the Celtics towards Banner #18, but it simply makes sense. His per-36-minutes numbers from last season show 18.5 PPG, 9.1 RPG and 2.6 APG, and don't forget the 48%/35%/75% accuracy from the field, beyond the arc, and from the free throw line, respectively. This may all mean nothing if Danny pulls off another trade-of-the-century, but this type of move may be what brings Title #18 to Boston.