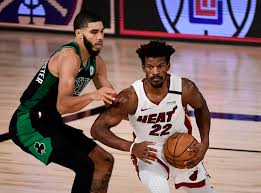 The Miami Heat are not the epitome of what is viewed as the ultimate, modern NBA team. They are not especially quick or athletic, but they took over last night's Game Five versus the Los Angeles Lakers to close the gap to 3-2 in favor of the Lakers.

It starts with Jimmy Butler. Many Boston fans remember him as the guy they did not want to see in Boston. Well, he chose to go to Miami in free agency, and it looks like a fine decision on bis part. Butler doesn't get the job done with upper-level athleticism, but he is so fundamentally sound. His footwork, passing and mid-range game were all on display

Jimmy played all-but-one minute in the 111-108 victory, scoring 35 points, while adding 12 boards, 11 assists, five steals, one block and only three turnovers. And he only committed two personal fouls while tending to Lebron James for much of the game. Butler attempted 19 field goals (making 11 of them), and only three of those 19 attempts were 3-pointers. He just seemed to be making all the right plays. I visualize Jayson Tatum taking on a Butler-type role with Boston next season.

Oh, and Duncan Robinson, the gawky white kid from New Hampshire that did not get drafted? He scored 26 points while hitting 7-of-13 treys. Only Ray Allen and Steph Curry have hit more threes in a Finals contest. Robinson and Tyler Herro represent the constant-motion shooter that the Celtics could use, either via the draft, free agency or trade.

So, what are the lessons for the Boston Celtics? Don't take so many 3-point shots unless the shooter is damn good at it. In the post-season, Robinson is hitting 40% of his treys, and Herro is hitting 37%. Lesson #2: Boston needs to pick up a never-stop-moving shooter for the upcoming season. And finally, Lesson #3: Celtics need a leader that relies on the fundamentals of the game, a la Jimmy Butler. That guy is Jayson Tatum. Fundamentals and hard work get the job done - no flash required. Just look at what the Heat accomplished last night.