Addressing need for strength, toughness and physicality for Celtics 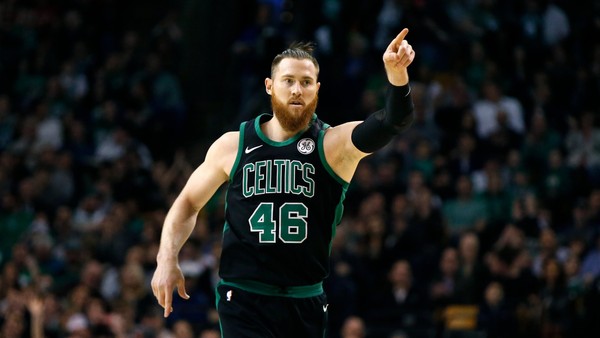 Even with the free-agent acquisition of center, Tristan Thompson, in the Celtics attempt to improve strength, toughness and physicality, I still maintain that Danny Ainge needs to bring back Aron Baynes. Marcus Smart already covers those three bases, and the Celtics wisely fully-guaranteed the $1.8 million contract for Semi Ojeleye for this season, despite the 6'6" wing having naysayers among the Boston faithful (Per Celtics blog's Adam Taylor):

Fresh off an impressive season in Phoenix, where he averaged career highs in points (11.5), rebounds (5.6), assists (1.6), and three-point percentage (35.1 on four attempts per game). Aron Baynes is an unrestricted free agent and fits the bill of a rotation caliber center that Boston so sorely needs.

Ojeleye is 240 pounds of solid muscle. To opponents jockeying for position against him, it must seem like bumping against a cement wall. "But he can't play", his critics might say. I say he can. He has been an elite defender almost from the start, and he hit 48-of-127 treys last season for a 37.8 percentage. His rebounding needs to improve, but he has become a reliable 3-and-D bench guy. And his $1.8 million deal is a bargain.

Baynes coming back should be a no-brainer. He is a great locker room presence, plays hard every night, and supplies the strength, toughness and physicality somewhat-lacking on the present Celtics roster. With Enes Kanter gone via trade, and Vincent Poirier possibly following the same road, filling the final center spot with the likable Australian just makes sense.