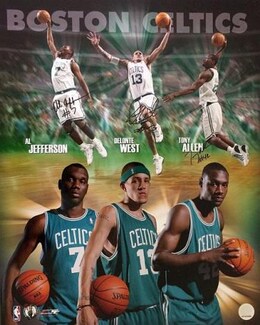 Most of you can recall what happened during the 2004 NBA draft. The Boston Celtics had the 15th, 24th and 25th picks and used them effectively. High-schooler and big man, Al Jefferson was snagged at number-15, and tough-nosed guards Tony Allen and Delonte West were taken with the 25th and 24th picks, respectively.

Jefferson acquired most his fame as the major piece in Ainge acquiring Kevin Garnett from Minnesota, but he also had a solid 14-year career with his superior post moves and rebounding prowess. Allen also had a long NBA career, earning a Title ring with Boston in 2008. But it was in Memphis that he truly starred, earning the moniker of "Grindfather" with his relentless defensive efforts, while also being named to the All-Defensive First Team three times and All-Defensive Second Team three times. Despite his recent battles with mental illness and addictions, West became Doc Rivers' starting point guard in the 2005-06 season, averaging 11.8 PPG, 4.1 RPG and 4.6 APG.

In the upcoming 2020 NBA draft, scheduled for November 18, the Celtics have first round picks at numbers 14, 26 and 30. The Boston roster is projected to be clustered for the upcoming season, so Ainge would like nothing better than to work a deal to trade the picks in order to move up in the draft and/or acquire a veteran.

Whatever happens on draft night, be assured Trader Danny will be have his eyes and ears glued to what is occurring. He certainly was in trade mode for the 2006 draft. After Danny took Randy Foy with the seventh overall pick, Foye was abruptly traded to Minnesota for Sebastian Telfair and Theo Ratliff, with the deal ending up having little positive impact on Boston's future.

But Danny did much better on two later moves that same night - trading for the rights to Rajon Rondo (21st overall pick by Phoenix Suns) and Leon Powe ( 49th overall pick by Denver Nuggets). Both players picked up Championship rings with Boston in 2008.

So which will it be - 2004 or 2006? Will Ainge use his three first round picks to acquire more youngsters? I doubt he will get any bites from rival GMs with Danny throwing out the three first-rounders to move up. But rest assured we will see Ainge in action on draft night if no deals surface before November 18. He simply can't resist that gambling urge.