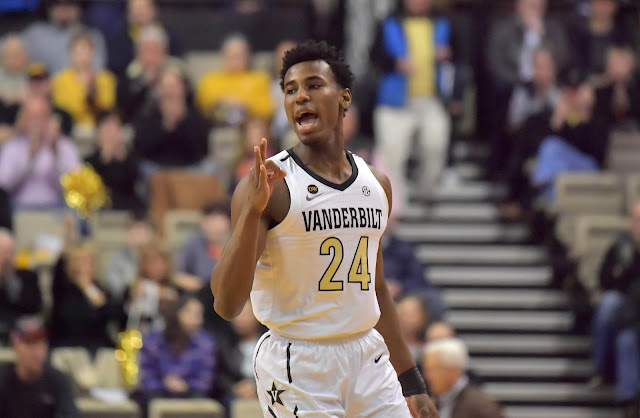 Both former NBA stars, Isiah Thomas and Dennis Scott, labeled Aaron Nesmith as the most-exciting rookie to watch this coming season. On this morning's NBA TV broadcast, Zeke and 3-D were openly enthusiastic about the prospects of the Vanderbilt product alongside Jayson Tatum and Jaylen Brown.

Isiah Thomas indicated he viewed Aaron as "NBA-ready", and already having an "NBA shot". He continued with:

"I don't see there's a lot in his game that needs to change. He's got that automatic shot where he's ready to go".

Dennis Scott was equally  optimistic about the 6'6" rookie wing, stating that coach Jerry Stackhouse had labeled Nesmith as "... the best shooter I've seen on a day-to-day basis". Scott commented further that Danny Ainge needs shooters around Tatum and Brown, and added "You need somebody to catch-and-shoot, not catch and dribble".

That certainly describes Nesmith. Aaron calls himself the "Absolute Assassin", which I hope sticks. I also favor "The ANnihilator", using Aarons initials as the precursor to the moniker. In my lone pre-draft projection, I advocated Nesmith as my choice at #14 for Boston. Danny Ainge agreed, as apparently did Zeke and 3-D. Aaron's non-stop, off-ball movement and "automatic shot" may lessen the isolation basketball we see too often with the Celtics. And I am very excited to see what "The ANnihilator" can do this season.