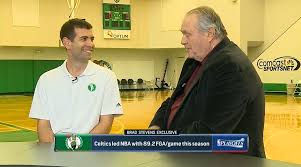 I doubt any Celtics fan ever used the term "placid" to describe the intense and fiery coaching styles of Red Auerbach and Tommy Heinsohn, but Boston's present leader certainly fits that description. A master at Xs and Os, out-of-bounds plays and switching team defenses, some fans often wonder if Brad should adopt a somewhat-more animated presence on the sidelines (per NBA.com following 1974 win vs. Milwaukee by Boston in Game 7 of Finals).

The victory was an affirmation of Heinsohn’s coaching ideas. In what he called “guerrilla warfare,” his teams kept the pressure on opponents at all times, controlling the tempo of the game and playing with great intensity. “We made teams crack in these playoffs,” he told the Boston Globe. “We got them to points in big games in the fourth quarter where they just didn’t want to play anymore.”

There you have it - "... they just didn't want to play anymore." Tommy Heinsohn coached as he had played - fast breaking at every opportunity and never taking the pressure off opponents. In his words, "guerilla warfare".

As brilliant a coach as Stevens is, he appears to exhibit K C Jones' quiet demeanor during games, in addition to Jones' reluctance to give youngsters significant minutes on the floor. At times, it seems like a bit more animation by Stevens may inject energy into his troops.

Red Auerbach ran his players into the ground in training camp, and that continued into regular-season games and playoffs. Heiny did likewise. I would love to see the return of relentless fast-break offense, tough rebounding and quick, long outlet passes.

Nobody can predict how the 2020-21 season will play out. Many things have changed due to COVID-19. Less slow and deliberate play. More run-and-gun. More fire from Stevens on the sidelines. And more floor time for the kids. That's what Tommy would do. I love Brad Stevens as Celtics coach. But can he just tweak his coaching style a bit?