The man behind the "Tommy Point" needs his own recognition 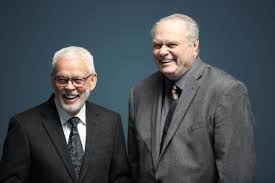 The following message I received from one of my followers, @CelticsCanada, via Twitter, but the sentiments are shared by me - and probably many others.

I’m probably just writing this to get over my own grief. I never met Tommy (Heinsohn) but when you listen to someone as often as I had for 40 years it leaves you feeling like you lost a loved one, someone whose advice and sage you relied upon. I’m hoping that the Celtics will do something for Tommy to a degree that the league has never seen before: such as make him an official assistant coach for the upcoming season so that the fans can hear his name called out before every game for one more season, and just possibly get Tommy that ever elusive 18th title.

Place Tommy Heinsohn anywhere you wish in the Celtics All-Time Hierarchy, but no one has been connected with The Green for so long, and in so many capacities, as Heiny. I love the idea of Tommy as virtual assistant coach for the upcoming season. And maybe an end-of-season Tommy Award to the player showing the most hustle, grit and determination for the year.

But now, I present my virtual All-Time-Celtic-Who-Took-More-Criticism-And-Gave-So-Much Award to Tommy right now. Heinsohn was demeaned by Red Auerbach (for the good of the team), fellow players, coaches and media, but he left this earth after making such a positive, and lasting, imprint on the Boston Celtics, the NBA - and, yes -- us.