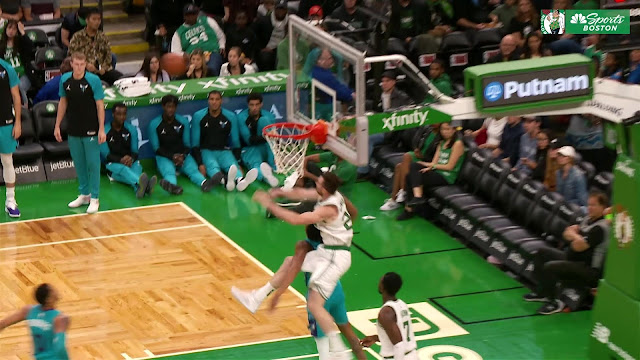 We should know in a few days if Gordon Hayward has decided to leave for greener fields or complete his unfinished business with The Green Team. It's his choice - or should I say it comes down to what he and his family (and Danny Ainge) can agree on. Using the "empathy test", can any of us place ourselves in Gordon's place and honestly say we would have endured that compost pile of misfortune as well as he did?

Gordon Hayward embraced Boston. He's had terrible luck. He's still their biggest free agent signing of all time (sorry Nique and X, you guys were past your prime).

I hope he sticks around and tries to finish what he started. I will be bummed if he leaves. pic.twitter.com/CRM3b7UJXV

Hayward has the option of picking up final year priced at $34.2 million or leaving it on the table and heading into free agency. With regards to Gordon's value in Boston, there are two sides:

This is the "glut of riches" argument, which I immediately toss aside. Gordon can play with anyone - anywhere - under any circumstances. He shoots, drives, passes, rebounds and defends. Though he lacks superior athleticism, he is one of the craftiest players in the League. He fits anywhere, and does what is needed to win games.

Hayward is not redundant. He has endured numerous injuries and subverted his game on behalf of teammates. He needs to stay.

This is my argument. I have written  that Brad Stevens starting all four of his scoring quartet may be in error, but having all of them at his disposal is a true luxury that any GM would love to have. That can't be frittered away. Gordon brings a veteran presence and stability to a team that sorely needs it, and he needs to stay.

I frankly envision Gordon, Kemba, Jaylen Brown, Jayson Tatum and Marcus Smart closing out many games this season, including the playoffs. Danny Ainge may have a major overhaul in mind, but specific tweaks would be sufficient. Certain members of the NBA media have made Gordon feel unappreciated. I am not among them.